Doctrine Perspective – The Understanding, The Execution, The Application, The Adaptation, The Recording, The Updating

Where the Perspective Started?

A Rifleman allocated to 1 South African Infantry Battalion arrives in Bloemfontein by train and is transported to Tempe Military Base by SAMIL50 according to the "ROFIE“RIDE” approach – meaning a specifically defined first time ride for recruits to the unit base. Each “ROFIE RIDE” is the same even though different members and ranks will drive the SAMIL50. A “ROFIE RIDE” involves loading the recruits into the SAMIL50 according to the maximum personnel carrying guideline; then preparing to drive by revving the engine to the maximum; pulling off as for a Formula 1 type start; turning is a radical movement left or right or swerves; stopping is done at the last moment similar to an emergency stop.

What happens in the back of the SAMIL50 – the two staff members are positioned directly behind the cab where the vehicle’s movement has the minimum influence on them, the recruits are thrown left/right/forward/backward by the vehicle’s movement. Recruits - you learn to hang onto your new friend, which you have only met 5 minutes ago; you learn to hate your old friend who just kicked you on the shin. 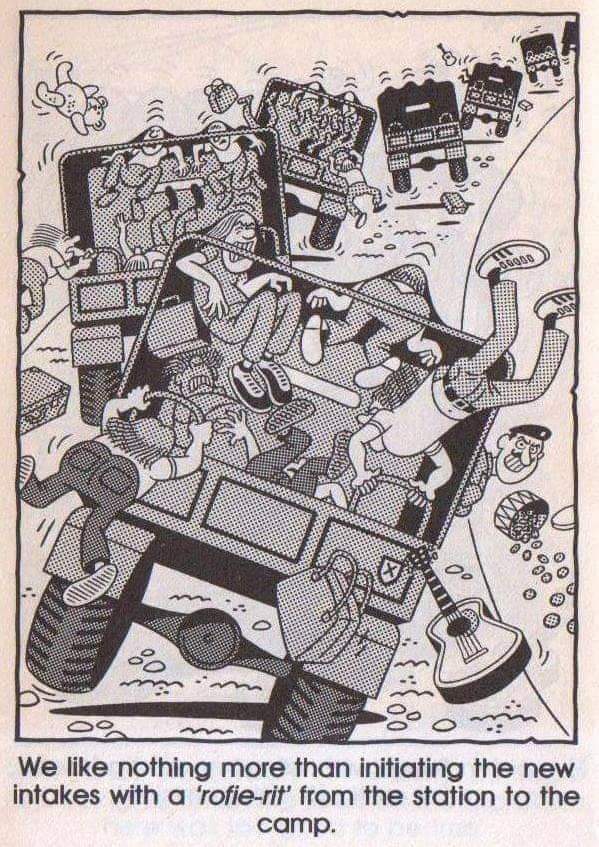 So why the “ROFIE RIDE” – it was a standard procedure to start the intake procedure and force the recruits to mingle and adapt to the situation quickly even though they were not told what is expected because the staff members knew exactly how to carry out the “ROFIE RIDE” to achieve the desired results based on the “ROFIE RIDE doctrine”. I will not argue that some “ROFIE RIDES” were possibly slightly less extreme or more extreme depending on the staff member’s assessment of the situation. And the “ROFIE RIDE” stopped at the base main gate and was never again applied to this intake because once the recruits entered the base other doctrine is and was applied. It does not matter who, what, where, when or why – there is always doctrine required to carry out the day-to-day activities.

Your instructor teaches you, according to prescribed established “Becoming a Rifleman” doctrine how to shoot the assault rifle, do basic map reading, buddy aid, drilling, using a tactical radio with the appropriate speech procedure, turn a bed into a square box, clean your bungalow, clean your subunit’s responsible area, do exactly what you are told at any time of the day, wash and iron your uniform and equipment in a shorter time that it took to dirty it.

Combat doctrine training then commenced to enable the Rifleman to be employed in battle according to the type of Army unit that he was allocated to, ie a Mechanised Infantry Battalion.

Various skill levels and occupational categories were available for the Rifleman to achieve as part of the Mechanised Infantry Battalion’s doctrine.

Who trained him? The same group of junior and senior instructors that made him a Rifleman.

According to what did they train him? Once again the prescribed established Mechanised Infantry Battalion doctrine.

"Various skill levels and occupational categories were available for the Rifleman to achieve as part of the Mechanised Infantry Battalion’s doctrine...."

But in initial combat training the Rifleman does not learn everything he needs to know during an operation and therefore he is only taught the basics creating the knowledge base for him to join any other Mechanised Infantry Battalion and within a very short period of time be able to adapt to and adopt the new Unit doctrine, in this case Unit doctrine of an operational nature, and participate in the day-to-day activities without creating dangerous situations that could result in loss of life, injuries and loss or damage to equipment, or have a negative influence on the operational execution resulting in a total unsuccessful disaster. He is also accepted by his new staff members because they know what his qualification involves and is based on.

The Rifleman is now exposed to how his new Unit operates according to the prescribed established Mechanised doctrine, eg they execute a quick attack slightly different to his training experience, but they still apply the prescribed principles for success. So during his training he would always be in the platoon as part of the assault group, but now he is allocated to the 3rd platoon that is usually employed as the subunit mobile reserve, but the assault group still exists and he knows what is expected of him when the 3rd platoon is tasked to relief a platoon in the assault group, similar as to when his platoon was relieved in the assault group by the subunit mobile reserve.

The prescribed established doctrine serving as the guiding factor for the Rifleman was developed by a members long before he joined the military environment. So how does he accept this doctrine, ie make it his own, as his guiding factor to execute his required combat role as part of the Unit?

Consider a 3 year cycle as follows:

Consistency of doctrinal application and combat execution over the 3 year cycle is ensured by the available prescribed established doctrine which is maintained for at least a 5 year cycle without any major changes.

Change the Rifleman rank to a higher rank, eg to a Staff-sergeant, Captain, Warrant-Officer, Major or higher. Do they also follow the 3 year cycle principle? The answer should be “Yes”; because when the doctrine changes then they have to learn again, but their experience background allows them to adapt to and adopt the changes quicker because it is possibly their third 3 year cycle exposed to the application of the prescribed established doctrine as part of their day-to-day activities, and the doctrine application process required of a soldier.

" A good way of testing your doctrinal perspective is to train an equal colleague...”

Click Here to talk us...
And Then – Why Prescribed Established Doctrine, Maintained Applicable and Appropriate Doctrine is Required

The Rifleman enjoys a successful career path and is appointed as a Captain in a Mechanised Infantry Battalion responsible for training the next intake of recruits. He remembers how long it took him to be able to accept the prescribed established doctrine as his own based on a high confidence level of understanding the doctrine and how to apply it, in other words being able to apply judgement in the application of the prescribed established doctrine. He is now also exposed to the external influences to his doctrine and starts to understand somethings that never made sense in the past.

What has ensured that, despite the multitude of doctrinal perspectives by a multitude of individuals at various levels of ranks and appointments, a level of consistency was maintained? – nothing else but the prescribed established doctrine for each activity required in the military for day-to-day activities.

To resolve your perspective, at any time, go back to the prescribed established doctrine and read what it says/discuss it with a colleague of equal qualification and experience – maybe it is wrong (suggest the corrections), maybe it is partially right (advise the changes), maybe it is so appropriately applicable (use it) that there is no room for developing a wrong perspective. However, doctrine should not only be developed to apply to single scenarios, but should apply to the appropriate level it is intended for, ie at Rifleman level the prescribed established doctrine should possibly not allow for the development of individual perspectives, but at subunit level the success of the operation could be dependent on the range of possibilities achieved by developing various appropriate perspectives of why and how the prescribed established doctrine can be employed.

A good way of testing your doctrinal perspective is to train an equal colleague and see if he applies the prescribed established doctrine in the same manner as what your perception indicates how it should be applied.

Prescribed established doctrine is the golden thread in the day-to-day activities required in a military environment to ensure no injuries or loss of lives, no equipment damaged or lost, and the operational end-state is achieved by the easiest way possible, irrespective of your perspective.

Please feel free to use our online form to contact us or see more...

View Our Portfolio Contact Us
Copyright © 2016. All Rights Reserved.